One of this summer’s most highly anticipated movies is Disney’s newest offering, Tomorrowland, starring George Clooney.  There is an exhibit in Tomorrowland, the film’s namesake land at Disneyland, to help spread excitement about the film. Here are a few of the images from the exhibit: 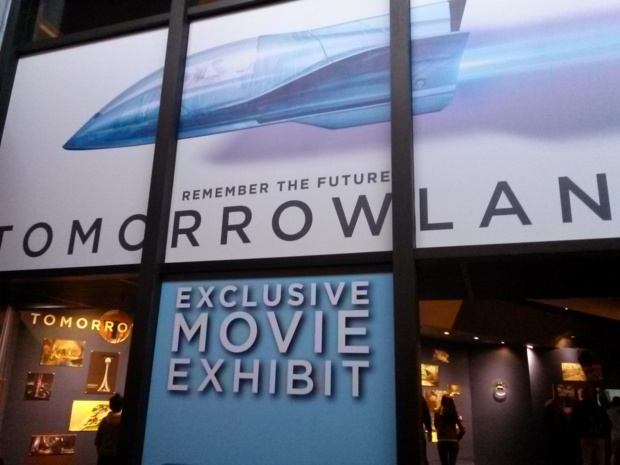 When SyFy’s Ascension debuted on Monday, I was excited.  I’m a huge fan of The Twilight Zone and Ascension had a definite Rod Serling vibe to it, what with the mysterious space ship designed to save humanity, a 100-year mission, and a crew trapped in the Kennedy-era with no idea what has happened on Earth since 1963.

Episode 1 was great.  The twist was superb.  The drama increased in Episode 2.

But Episode 3 sputtered.  Last night felt like a letdown, in some ways.  Yes, they set things up in a way that screams “sequel,” but there was way too much going on to really feel like we reached a conclusion.  In fact, I’m not sure we concluded anything.  The show simply ended.

Had there been one more night, things might be different.  Episode 3 felt rushed.  It was moving in an interesting direction, but at that point so many storylines hatched that there was too much to fit into two hours.

If SyFy has plans for Ascension, I will tune in.  I want for there to be more. There has to be more.  Ascension started out too strong for the story to end here.

What did you think?  Am I alone in my thinking?

(A full review, laden with spoilers, will follow soon)

I first saw promotions for the show during San Diego Comic Con, where the SyFy Channel decked out Mary Jane’s Cafe at the Hard Rock with Ascension-themed decor.

I had no idea the show would be what it is.  And I love it.

The concept is simple: In the 1960s, a super secret plan was realized which sent hundreds of Americans into space aboard a giant ship.  The 100-year mission was to arrive at a new planet capable of sustaining life.  Several generations of inhabitants would make the journey: those that were there for the launch, those in the “middle”, and those who arrive at the new planet after 100 years.  The “Middle” generation has to deal with the psychological impact of being born and dying on board a ship, with no option of leaving, and no possibility of a return to Earth.

We meet the residents of Ascension in the 51st year, when a suspicious death delivers the ship into uncharted internal strife.  The most startling aspect of the show is that the Ascension residents are now second-generation residents, but they can only refer back to Earth’s history as it was in the early 1960s.  That means they left Earth before men walked on the moon.  They are advanced…and yet they are stuck in the Kennedy-era.

Meanwhile, back on present-day Earth, we meet the man who originally engineered the whole idea (he’s in a senior care facility), and his son, who is trying to protect his father’s legacy.  When a student approaches him claiming that the Ascension project is in fact a reality, the son blows him off, stating that there is no truth to the project at all.

However, Ascension is real…but it’s not what it seems….  The twist is a game changer.

Watching Ascension is like watching a long episode of The Twilight Zone.  The Cold War and racial/social tensions exist as they did in the 1960s even though 51 years have passed.

Part Two airs tonight on Syfy.  I’ll discuss more details as soon as the show has aired.  This is one show that should remain spoiler-free!

I like action movies.  I like Sci-Fi movies, too.  I saw Independence Day when it first came out, and then I saw it again.  The thing that always gets me is that I want to see what happens next.  Aliens invade Earth, and Earth wins.  What next?  What did civilization do to recover?

In War of the Worlds, much of the world was destroyed by the aliens that had been dormant under the Earth’s surface.  Germs take them out.  But what happens after that?  What does humanity learn?

The Walking Dead gives us snippets of what led to the zombie apocalypse.  Personally, I’d like to see more of what happened before Rick woke up in the hospital, but I like that we’re seeing the aftermath.  I’m fervently hoping that the spinoff gives up even more insight into what is going on around the world.

Deep Impact came the closest to satisfying my need to see what comes next.  The asteroid hits the planet and a giant tidal wave takes out the Eastern Seaboard, but later on we see the crews rebuilding the White House.  It’s uplifting.

I feel the same about reality TV shows.  Have you watched ABC’s The Bachelor or The Bachelorette?  Here’s what I’d like to see…and then I’d actually watch it.  They film the men and women vying for the Bachelor/Bachelorette’s affections, and when crazy stuff happens behind the scenes the Bachelorette/Bachelor is completely unaware.  It makes for good dramatic fodder for the audience.  But what if the producers allowed the stars to secretly watch tape at the end of the day so that he/she can see what’s really going on in the house…. Can you imagine that drama??  All of a sudden those lies and cover ups are out in the open.  There can be no denying it.  He he/she said it, then there is no arguing…it’s all on tape.

I think TV and movies should switch it up a bit.  Show us the stuff we haven’t seen before.  All of a sudden, a sequel to War of the Worlds will look like a modern take on The Patriot, only we’re fighting aliens and not Red Coats.

Maybe it’s the history major in me, or maybe I’m just bored with more of the same.  I just think a little change here and there would be nice…

Less than ten years ago I bought four-day badges for SDCC with no trouble.  There was no line overnight, no hunkering down in front of every wi-fi enabled device waiting for the button to turn green.  I just bought badges.  In fact, I bought a 4-day badge for my adopted grandmother just so she could see what SDCC was all about.  That year, the Exhibit Hall was not crowded.  SyFy (or, as it was known back then, Sci-Fi) had a huge blobby looking thing in the middle of the floor, and there were huge areas dedicated to kids and adults playing Pokémon and D&D.

Nowadays, you’re lucky to be able to walk on the floor of the Exhibit Hall.

Back in 2011 I spent the night from Preview Night until 8am Thursday morning to buy badges for 2012.  It was worth it.  The people who showed up at 6am found themselves at the back of a 2 mile long line.  I got there at 11pm and was about a hundred people back from the front of the line.  I was with a guy named Tony who was from Florida.  He kept drinking Vodka from a water bottle, and at 3am he was infuriated that all of the liquor stores were closed.  And then there was the Ninja from Alaska.  He kept telling us he was half Chinese, and Tony and I didn’t believe him until the sun came up and we saw that he was in fact half-Chinese.  It remains one of my favorite Comic Con memories.  But that stopped after 2011.

Let’s face it, people, the times, they are a changing.

For 2014 badge sales, we know a few things so far.  Prices have increased, 4-day badges no longer exist, and you can buy badges for three other people.  Now there is going to  be a lottery system once you arrive in the Waiting Room.  (For those of you not in the SDCC know, the Waiting Room is like something from “The Matrix” where a bunch of us geeks and nerds wait patiently for our turn to buy badges)

So this lottery system…is anyone else getting a Hunger Games vibe?  “I’m here, I’m in! …oh damn, my number is too high.”

For all of you anticipating the SDCC Badge Purchase Day, “May the odds be ever in your favor.”

1. A teleporter.  This one is pretty self-explanatory

2. A Starship.  Who wouldn’t want to work on a starship?

3. Replicator.  I’ve never figured out how a replicator could work, but it’s a great concept.