Here in San Diego, there are proposals all over the place for new stadiums for the Chargers, tearing down the iconic San Diego Sports Arena (if you saw the movie Almost Famous, then you know about he Sports Arena; not only that, but that’s where my parents saw Elvis and the Rolling Stones back in the day), and reconfiguring Balboa Park ahead of the 2015 centennial celebration.  The thing most people don’t know about San Diego is that after a tumultuous decade or two of pension crises and irresponsible political doings by politicians with strange agendas, getting major plans together is harder than it should be.

That said, the expansion of the Convention Center makes a lot more sense than building a stadium that is used for a few events each year as opposed to a larger convention center that brings millions of dollars to the city on a regular basis.

It’s also important to note SDCC’s origins in San Diego.  If Los Angeles wants a major con, then make one.  (As long as it isn’t called “comic con” you’re ok…right, Salt Lake City??)  Comic Con should stay in San Diego because it was born here.  It wasn’t until the movie studios came down from LA that the lines got longer and panels filled up to the brim.  Frankly, I think that there is enough interest and enough capacity to have a major con in San Diego, LA, and Las Vegas.

Check out the article from Entertainment Weekly about SDCC:

Here is a very interesting article from HitFix: http://m.hitfix.com/motion-captured/why-dcs-serious-superman-may-give-marvel-the-big-screen-edge

I have always been a Batman fan. I saw the 1989 version in the theater when I was 9.  I watched Christopher Reeves as Superman (and I adored watching him with Richard Pryor in Superman III)

My brother in law is a die-hard Marvel fan, to the extent that he has Captain America tattooed to his calf.  Recently, he and my sister initiated me into the world of Marvel.

I spent most of my time at the Marvel booth at SDCC. It was fun. The people working there were nice.  The fans were great.

So reading this article about the Warner Bros “no jokes” policy is saddening.  As much as I enjoy Batman and Superman, their movies don’t hold a candle to Marvel.  I am not looming forward to Batman vs Superman nearly as much as I am Avengers: Age of Ultron. I loved Guardians of the Galaxy.  I want to love the DC movies. Truly, I do.  But they just can’t be the same if they remain as dark as they have been in recent years. (Even the Tim Burton movies were funny at times…and nipples on the Batsuit is the longest running joke of all…) No one is suggesting a return to the 1960s campy Batman, but even that Batman is making a comeback.

Warner Bros and DC: Please wake up! Jokes are needed in your franchises. Lighten up.  As Joker said, “Why so sad?”

Here are some of the cosplayers I’ve seen so far at Comic Con: 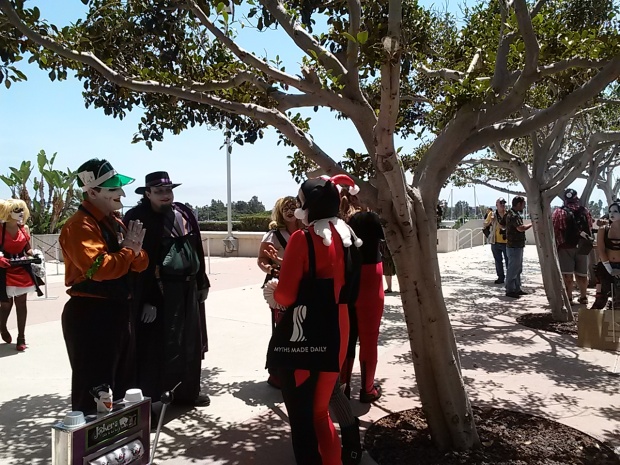 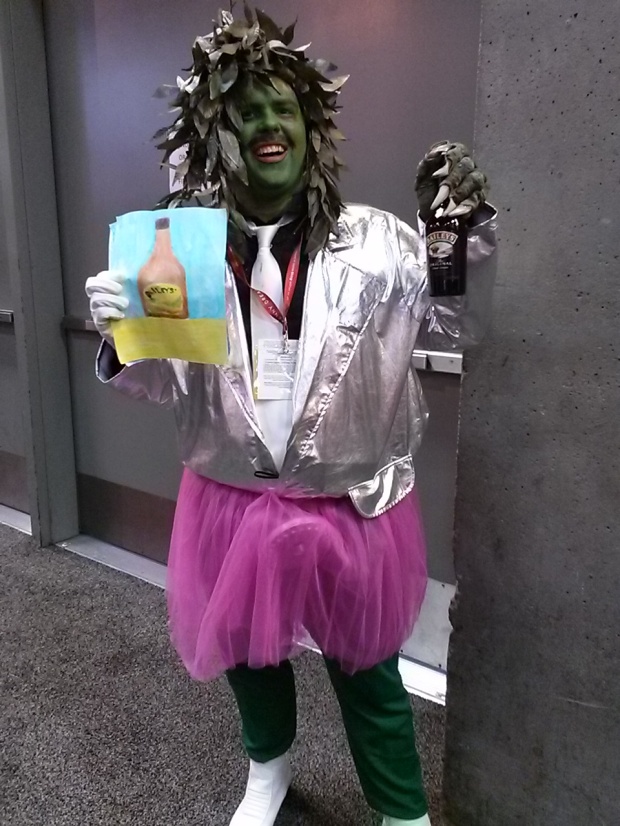 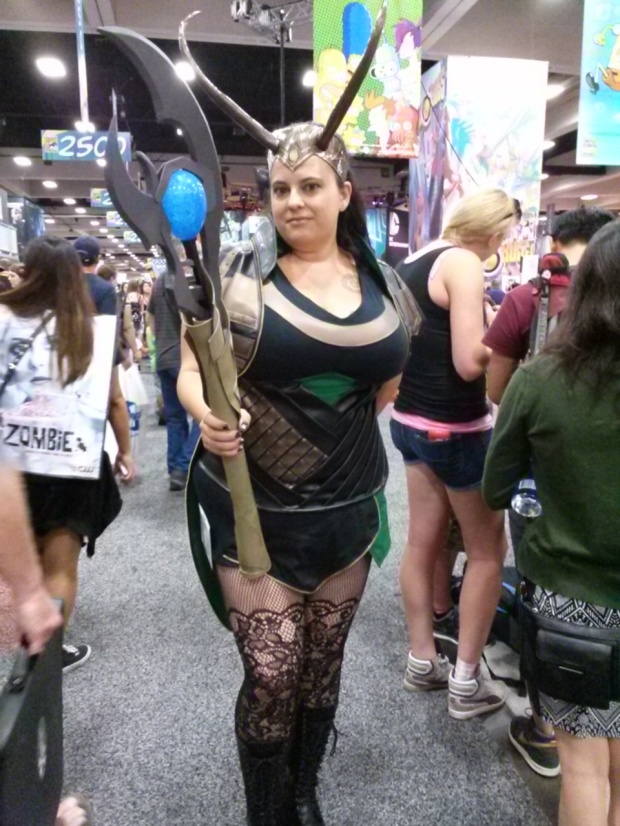 These are just a few…keep checking back for more!!

The Comic Con exhibit hall floor is an amazing place. You can literally find anything here. Every fandom is represented at the hundreds upon hundreds of booths. 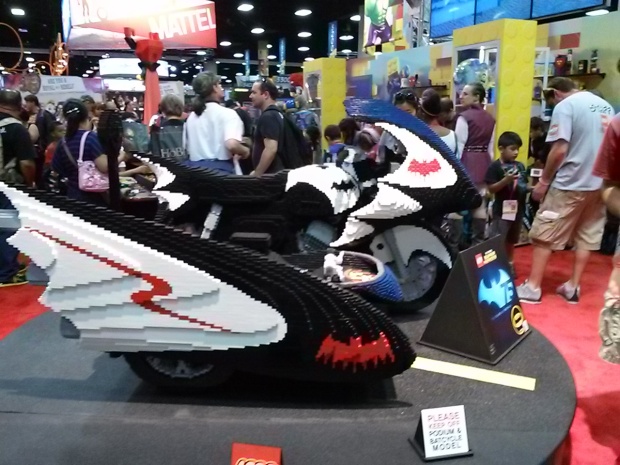 This year I really think that the booths and exhibits from the big names are the best in years.

2014 marks the 75th anniversary of Batman and DC is celebrating in a big way.  They have the new cape and cowl from the Ben Affleck incarnation of the Dark Knight. 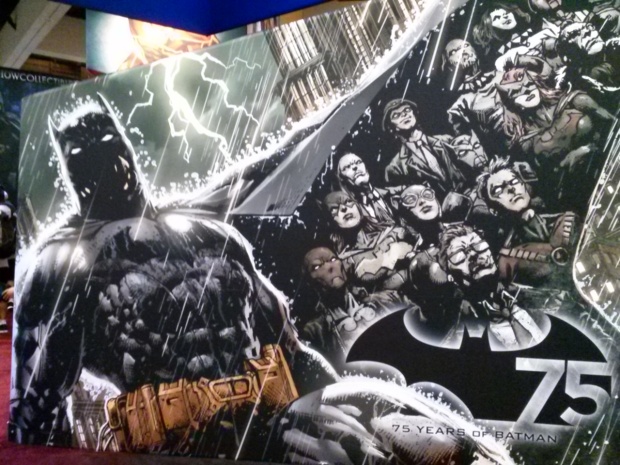 Now that Disney owns Marvel and Star Wars, they dominate the floor, and yet Disney itself is not as well represented.  Images of the new Thor and Captain America are all over. 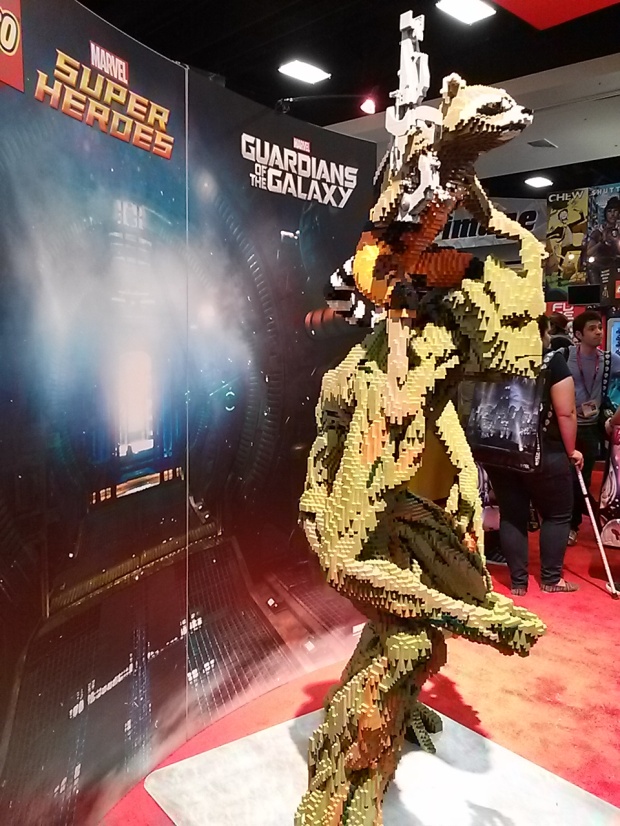 Keep checking back for more coverage of SDCC 2014!

Eight years ago you could buy a 4-day pass to Comic Con and walk in the front door when the Exhibit Hall opened.  Syfy had huge installations in the middle of the floor, and their booth was surrounded by Pokemon and D&D gaming tables.

Now, people enter a lottery to be able to buy badges, and the Exhibit Hall floor is crowded beyond belief.  Vendors are on a waiting list to get in.  Syfy has moved across the street to the Hard Rock.  In fact, many of the neighboring hotels have taken advantage of SDCC by sharing their ballrooms and convention spaces for extra panels.  Even Petco Park has cashed in as it hosts The Walking Dead Escape.

Personally, as a native San Diegan, I think that SDCC is a welcome boon to our city and I support anything that needs to happen to keep SDCC here.  SDCC was born here, after all, and the money generated from out-of-town guests is more than we’ll ever see from the Chargers.  I think SDCC should be a city-wide event, spreading beyond the confines of the Gaslamp to other areas of San Diego.

I get as excited about the SDCC banners going up along Harbor Drive as I get when I see the first Christmas trees during the holiday season.

(That said, watch for my coverage of SDCC here on my blog and on Twitter @SarabethPollock