I have always been obsessed with New Orleans.  When I read Interview with the Vampire when I was 14, my love affair truly began.  With every Anne Rice book I read, the city came to life in my imagination.  I read everything I could about the city.

In 2011 I was fortunate enough to travel to New Orleans over Thanksgiving weekend.  It was a work trip, but it allowed me a chance to visit the city I already knew I loved. 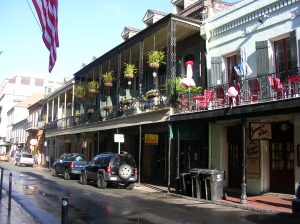 New Orleans was everything I imagined it would be, and more.  I fell in love with the city in earnest.  The world of Anne Rice’s vampires came to life.  I could imagine Lestat and Louis walking down one of the narrow streets in the French Quarter.  I strolled along the streets of the Garden District and saw the house on First Street that had been Anne Rice’s home for so many years.

It’s rare these days to have a book series generate such a love affair with a particular location.  We saw it with Twilight and Forks, Washington, I suppose, and we’re seeing it now with Fifty Shades of Grey fans flocking to Seattle.

For me, though, the visit wasn’t important because I’m a fan of the books and the characters; rather it was that I wanted to see for myself that such a magical place could exist.  And it was true.  New Orleans has its own magic, its own charm, and no other city in the world can recreate that charm.  New Orleans was as central a character in Anne Rice’s books as Lestat himself.  The city was more than a setting.  It came to life in the books.  I saw the banana tress and the wrought-iron railings.  They appeared exactly as described. 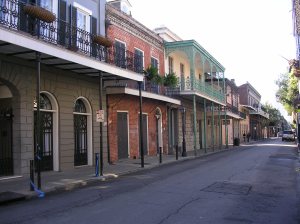 With the release of Anne Rice’s new novel, Prince Lestat, I find  myself fondly reminiscing about my trip to New Orleans, even though New Orleans really isn’t featured in the book.

If you haven’t been there, you must visit.  You simply must.  I cannot wait to walk the cobbled streets and smell the beignets from the Cafe du Monde.

The Vampire Lestat is back.

After eleven years, Anne Rice has returned to The Vampire Chronicles in a purely brilliant tour de force that’s sure to delight fans young and old.  Rice is a master at creating vibrant mythologies.  From her vampires to her witches and everything in between, she cultivates worlds that are rich with history and character.  It’s clear that everything in the book has been meticulously researched, and every detail cross referenced for accuracy.  Prince Lestat is no exception; this is an epic story that spans 8,000 years and brings together the familiar faces fans know and love as well as exciting newcomers who make a welcome addition to the mythos.

The story begins with a mysterious Voice that has been causing a stir among the world’s vampire population, speaking to the elders and telling them to exterminate the hordes of fledglings that have amassed over the years.  There’s a bit of an overpopulation problem facing the vampire world since The Burning that took place during Akasha’s reign of terror in Queen of the Damned.  Now, scores of vampires are dying around the world and there’s no telling who will be next.  That leaves the million dollar question: Who is behind this Voice and what does it want?

Lestat returns as our fearless narrator.  Lestat is as puzzled by the Voice as everyone else, and he’s determined (albeit reluctantly) to get to the bottom of it.  He weaves through time like a warm knife cuts through butter.  We move from present day to the time just after the events of The Tale of the Body Thief, and all parts in between.  Along the way we meet up with old friends who are equally concerned about this Voice and its motivations, and this quest for answers unearths many shocking truths that will impact the vampire world for years to come.

It’s not difficult to understand Lestat’s magnetism and how it has continued to grow over the years.  Lestat, as an archetype, is appealing to many people in the same way that Tom Hiddleston’s Loki appealed to so many in Thor and The Avengers.  They’re dark heroes, anti-heroes, and their charismatic personalities make them irresistible, even when they’re at their most exasperating.  Lestat has been on a quest for redemption for a long while, dating back to well-before 2003’s Blood Canticle.  Prince Lestat takes Lestat full circle on his quest, though he never stops being the Brat Prince his fans know and love.

Anne Rice books are like beautiful symphonies, and Prince Lestat is no different: It starts out slowly, allowing the drama and anticipation to build, until the story reaches a feverish crescendo.  The only issue I had with Prince Lestat is that it wasn’t long enough!  At 460 pages, the story felt a bit rushed toward the end, but this might be due to the numerous characters that show up to move the story along.  The book could have been a thousand pages and still felt rushed.  I wanted to hear more from the other characters to learn about where they have been over the years, but hopefully this will happen with future novels.  The world of Anne Rice’s vampires is ripe with possibility.

In an age where authors are granted movie rights before their novels hit bookstores, it’s refreshing that in spite of the eleven year gap since the last installment of The Vampire Chronicles, Lestat and his companions are back in even finer form, sporting their “flashing” silk ties, fine lace and velvet frock coats.  These details make Anne Rice novels what they are: modern literature at its finest.  I’m keenly aware that I’m reading an author whose writing will be considered a classic for generations to come.  Prince Lestat is a delightful read and will satisfy die-hard fans of The Vampire Chronicles and entice new blood to the fold.

I have about 75 pages left of Prince Lestat  I’m deliberately pacing myself.  I am forcing myself not to peek and see which chapter is next.  I want to know what happens but I don’t want to reach the end of the book.

It’s quite the dilemma.

Like every Anne Rice book, Prince Lestat moves along like a fine piece of classical music, weaving in and out until the crescendo builds and the song-in this case, the story-comes to an end. The process can take a while.  The mythology must be built.  But I can sense that the end is in sight and it’s both satisfying and saddening.

Lestat is in fine form. Rest assured of that. I am thoroughly enjoying seeing friends from previous books popping up. Prince Lestat could be a thousand pages and I don’t think it would feel long enough.

But the end is in sight.  My next post will most likely be my review (still spoiler free, of course).

I’m almost to page 300 in Prince Lestat. I could have easily finished the entire book yesterday when it was released, but I’m savoring every bit of it.

This evening I met with one of my students who told me about a project she has for her English class.  It’s a mythology project where she must study a culture and their myths.  This got me thinking.

So much of Anne Rice’s writing revolves around myths. I don’t speak of vampire mythology or lore, because she created her own world.  I speak of the mythology created every time one of the characters shares his or her story.  The history is so rich.

When people critique her work, it is often because they find Anne Rice books to be too long, too flowery, too dense. What they don’t realize, and certain can’t appreciate, is that she is creating a mythology of her own.  She isn’t creating some transient backdrop so she can insert her characters. She not only gives life to her characters, but the settings themselves become characters. Take New Orleans, for example.  The city is now synonymous with Anne Rice.  The flat on the Rue Royal is as famous as Lestat and Louis.  Anne Rice creates new worlds in her writing.

I’m happy to report, given this digression on mythology, that I am winding through Prince Lestat and stopping to appreciate the mythology along the way. Prince Lestat is a gem when it comes to mythology.

I read Chapter 12 of Prince Lestat this morning.  I saw the words “flashing silk tie” and smiled at once because these are the descriptions I have come to know and love in every Anne Rice book I have ever read.

I became a history major largely due to her writing.  To me, the vampires were secondary.  I was never a Goth. I liked the characters because I loved their rich stories. I love the idea of having a conversation with someone who witnessed the fall of Rome and who painted in Venice.  I fell in love with the city of New Orleans and was thrilled when, in 2011, I was able to travel there for a week and stay in the Vieux Carre (French Quarter…yes…I even learned French after studying Spanish, partly due to The Vampire Chronicles).  The idea of being around creatures who are literally living history books makes my fingers twitch because I love history and I’d be the equivalent of David going from vampire to vampire asking them to share their stories. (My fingers always twitch in those situations…it’s a reflection of my continual desire to read and write “stuff”. I’m a total nerd that way…)

So now I’m at the halfway point and I’m rearing to go.  I’m racing to the finish because I honestly don’t want to put the book down.  Prince Lestat has been worth the wait.  It’s everything I hoped it would be. (So far…you never know what can happen in 200 pages…)

At long last, Anne Rice’s newest installment of The Vampire Chronicles has arrived.  Prince Lestat hit stores today.  I was at Barnes and Noble at 10am sharp and I had my copy in hand at 10:02.

The last time a book in The Vampire Chronicles was released was back in 2003.  I was 23 years old, and my life was very different than it is now.When I consider that I first read Interview with a Vampire when I was 14 (in 1994), it makes me see how much has happened in the past 20 years.  I grew up with Anne Rice books, though most of the symbolism came to me years after reading the books.  I’m glad to be reading with the perpective of time under my belt.

It’s fitting, then, that we celebrate the release of Prince Lestat.

Reading an Anne Rice book is to take a journey with old friends.  I’ve read critiques of her books from new readers who have turned to The Vampire Chronicles as the vampire rage has hit new peaks. Some of these critiques complain about the verbose nature of the books.  I told the lady at the bookstore today that reading Anne Rice is like having a thick smoothie when you’re used to drinking water.  This is due, in part, to the details that Anne Rice is famous for.  They’re never just curtains; they’re velvet curtains.  Armand never wears lace; it’s Versailles lace.  You have to understand that this is why it’s great literature.

So my plan is to post blog entries about the experience of reading Prince Lestat as I go through it.  I will never post spoilers.  My full review will follow as soon as I’m done with the book, and you’ll be able to read it here and at http://www.darkmediaonline.com.

Are you about to take this journey into Prince Lestat with me?  Please leave your comments below!