The Amazing Las Vegas Comic Con (ALVCC) took place June 19-21, and from all appearances it was hugely successful.  Comic and pop culture fans descended upon the South Point Hotel and Casino on the southernmost tip of the Las Vegas Strip for three days of fun in the summer heat.  (Yes, it was over 110 all weekend long, but we were able to stay inside with tons of air conditioning, the way Mother Nature intended…)

I arrived in Las Vegas on Thursday evening.  My plan was to have a day to relax prior to the convention, and this was a great idea.  It’s important to pace yourself in Sin City.

Friday morning I woke up, got some work done, and had a nice buffet lunch.  Press passes were available at noon, but a very helpful staffer gave me the program guide early so I could study it over lunch. 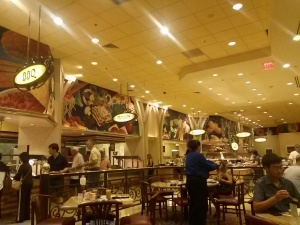 By 3pm the South Point was buzzing with comic con fans.  Seeing Elsa from Frozen in the casino surrounded by excited kids on vacation gave me a hint of what was to come.

The ALVCC Exhibit Hall took up the entire South Point convention area, as well as part of the arena concourse.  They also used concourse space for the main panel room, which was very convenient, but not very practical.  (More on this later)  Given the excessive heat outside, you’d think it could be warm inside, but it was actually quite comfortable in the massive Exhibit Hall.  At times it was even chilly in there.  Even at the busiest point on Saturday, the con floor was never unmanageable.  The event organizers did a great job with spacing the booths to allow for easy crowd flow; there was an open perimeter around the outside to allow for ease of access when you needed to go quickly from one end of the room to the other.

ALVCC boasted over 200 artists in Artist Alley.  There were two rows of spaces that spanned from one end of the Exhibit Hall to the other, and artists were lined up on both sides.  At times it was overwhelming to see so much great art displayed at once because it made choosing what to buy even harder.  In addition to Artist Alley, there were over 150 exhibitors selling must-have toys and collectibles. 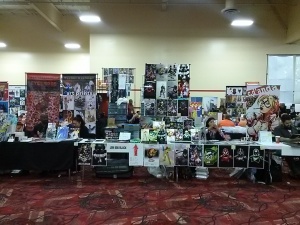 Saturday programming included the highly-publicized panel with Deadpool creator Rob Liefield, as well as a panel with the always charming John Barrowman.  The only downfall was that the big panels were held on the concourse in a curtained off area.  The big panels were standing room only, even though the area could have been expanded.  I think that it would be great to make the area bigger, since the space was available and not limited to the confines of a room.  The noise level was also an issue because there were booths and games directly outside of the curtains.

The last event of the night on Saturday was the costume contest, where all of the cosplayers came out to display their awesome costumes.  The judges were looking for more than just costumes; they also took into account the craftsmanship of the costumes.  The best in show winner was Oberon Martel, from Game of Thrones.  Oberon was wearing a handmade leather costume that he hand-tooled himself.  It was quite impressive, and it was nice to see that his hard work paid off. 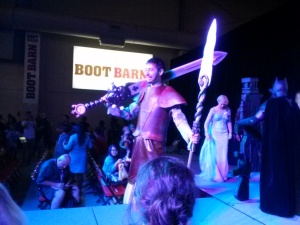 In my opinion, ALVCC is the perfect comic convention in terms of size, content and exhibitors.   There was enough going on to keep me busy all weekend.  I don’t know the final attendance numbers but I do know that the parking lots were full on Saturday, and yet I didn’t get the claustrophobic feeling in the Exhibit Hall that I’m used to at SDCC.  There was plenty of space for everyone, and having that space made it easier to meet and greet artists and exhibitors.  And having a “self-contained” convention was nice, too.  The South Point has a midnight breakfast special, and there was a huge line of ALVCC people waiting to get in.  It was awesome.  Every elevator, blackjack table, and restaurant was full of costumed fans.  Vegas is fun in and of itself, but add a comic con and it gets even better.  At one point we were out on the Strip late at night and we ran into a trio of Halo cosplayers.  It was great. 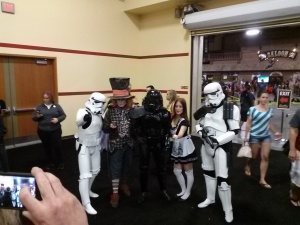 If you haven’t been to Amazing Las Vegas Comic Con, make plans to be there in 2016.  It’s, well…amazing!